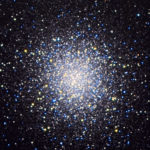 Star clusters are our galaxy’s oldest inhabitants and formed first as the galaxy was forming.

Please note that this event is held “weather permitting”, and is cancelled if it is raining or excessively windy; announcement of a cancellation will be posted both on this page as well as facebook.com/sdbhas.  Please arrive well before the presentation is to begin so car lights do not damage night vision.

The Life of a Globular Cluster