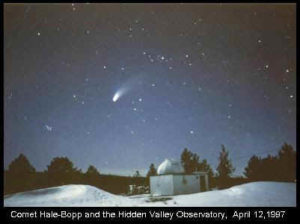 A brief history of the Black Hills Astronomical Society is below.

Detailed histories as well as other documents can be found at the bottom of the page.

The Hidden Valley Observatory had its beginning in the fall of 1962.  A decision was made to construct a permanently mounted telescope of sufficient size and performance to promote astronomy in Rapid City as well as encourage society members to further their own interests.  After investigating several sites, the present location (4715 Hidden Valley Road) was obtained on a twenty-five year lease from St. Martin’s Academy, with subsequent 10-year renewals. With the exception of the dome, which was constructed by the Rapid City firm Rapid Tank, the entire project was constructed by RCAS members.  Financial support was given by the membership as well as interested businessmen in the form of both money and building materials.

The observatory opened its doors to the general public in September, 1965, having its first “Journey to the Stars”.  The opening was very well received as approximately 1,000 guests attended the first three nights of observing.  “Journey to the Stars” became an annual event where numerous other telescopes were setup outside for use by the public. Journey to the Stars has since been expanded to several nights each month from June through August.

The Hidden Valley Observatory project was described in a feature article in the February, 1967 issue of Sky and Telescope magazine. 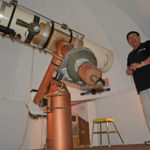 Frank Belinskey, past BHAS President, and the 50-year old telescope.

Operation of the observatory was short-lived; however, for in the summer of 1967 vandals broke in and destroyed the optics of the telescope in addition to stealing many valuable items from the building.  About one year later, the RCAS, under new young leadership, decided to rebuild.  They raised money by various means and successfully paid off the old debts as well as making the renovations.

The original telescope was a 12.5 inch (31.75 cm) Dall-Kirkham reflector.  Because of the amount of time and money involved it was decided to replace the telescope with a Newtonian reflector of the same size.  This change required the construction of a new observing platform and a longer tube for the new optics, which were purchased from the Optical Craftsmen, Inc.  Space limitations inside the dome restricted the telescope to an f/5.89 focal ratio.  The addition of a large secondary diagonal resulted in the telescope having a wide bright field ideal for the observing and photography of deep-sky objects.  Deep-sky objects are relatively independent of the poor seeing conditions prevalent in our area.

In 2015 an effort was begun to replace the fifty-year-old Newtonian telescope with a more modern go-to telescope and an astronomical camera that would allow deep-sky imaging.  A grant proposal was submitted and funding was approved by the South Dakota Space Grant Consortium and NASA that allowed the purchase of a 12″ Meade LX200 Ritchey-Chrétien telescope and a cooled monochrome ZWO ASI174MM astronomical camera, and was installed in the observatory in time for the 2016 observing season.  In 2017 a flat-panel LCD was donated to the observatory, is mounted in the main entry area, and displays real time deep-sky imagery from the camera.  The HVO telescope has formed the cornerstone of the Society’s summer star party workshops for over fifty years, and allows BHAS to continue its long tradition of outreach to schools, universities and the general public. 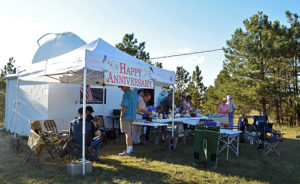 The Early Years – 1950-1959, a detailed history written by one of the very early members (and eventual Observatory Director), Ron Dyvig, as a PDF.

1954-2020, History of the Rapid City and Black Hills Astronomical Societies in a PDF incorporates material from Ron Dyvig’s The Early Years.  If printing the PDF, a cover sheet and spine slip for use in a binder is available for download in Word document format.

Newsletters and miscellaneous documents from across the years can be found on this page.