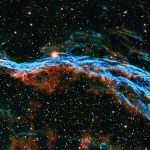 NGC6960, The Veil Nebula, in the constellation Cygnus (The Swan)

UPDATE: DUE TO INCLEMENT WEATHER FORECASTS, THIS WORKSHOP HAS BEEN POSTPONED TO SATURDAY, AUGUST 27

Please note that this event is held “weather permitting”, and is cancelled if it is raining or excessively windy; announcement of a cancellation will be posted both on this page as well as facebook.com/sdbhas.  We generally begin observing at 9:00 P.M.

Nebula derives from the Latin for ‘mist’ or ‘vapor’, and until the early-1900’s was generally used to refer to any astronomical object that appeared hazy – including star clusters.  In fact, what is now known as the Andromeda Galaxy (M31) can still be found in older textbooks to be presented as the Andromeda Nebula.  With Edwin Hubble’s discovery in the early 1920’s of Cepheid variable stars in the Andromeda and Triangulum Nebula, this proved that these distant objects were in fact galaxies, not simply hazy clouds of gas and dust.  Nebulae are broken down into two main classifications, dark and bright.  Not surprisingly, dark nebulae do not emit light but, instead, are clouds of gas and dust (similar to soot) that are silhouetted against a bright background, effectively absorbing/blocking background light.  Dark nebulae can easily be seen as seams of darkness weaving throughout the dense star regions of the Milky Way, especially the ‘Northern Coalsack’ between Cygus and Cepheus.  Bright nebulae, however, are broken down further into four types: emission, reflection, planetary and supernova remnants.  Although the long-exposure images of nebulae can be striking, such as those of the Veil, Ring and Crab Nebulae, visually it is often difficult, or impossible, to see nebulae without the aid of special narrowband filters that reduce light pollution and enhance contrast.  The Orion Nebula, which rises high in the southern sky during the winter, is one of the few nebulae that can be seen with the naked eye.