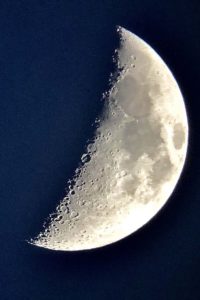 For Christmas one year Marianne got me a tabletop 4′ reflector telescope.  It’s like the one from Edmunds Scientific you’d give your child the year after you got them the chemistry set.  For a few months I ignored it, then I began to play with it.  I realized that I could hold my iPhone up to the eyepiece and if I aligned the two just right, I could take photos.  Not only that but I could adjust the exposure and zoom in.

I started going to the Black Hills Astronomical Society meetings in Rapid City and went to a couple of their star parties.  While at the star parties I’d ask if I could look through their telescopes, and then ask “could I try and take a picture” while I pulled out my phone.  Most often I couldn’t get the iPhone and eyepiece to align.  But now and again, it worked!

The 4″ reflector works to look at the moon.  For other celestial objects–not so much. . . until Comet Neowise appeared.

On 9 11 19 I attend another BHAS event, the transit of Mercury across the Sun.  Most of my photos didn’t turn out as the bright sunlight made it hard to see anything on the screen.  Thanks to the BHAS members who let me use their telescopes.

The little dot is Mercury!

In the meantime I built a stand and iPhone holder to make it easier to take photos (check it out here). Here are iPhone Moon photos taken through my 4″ telescope in the winter and spring of 2000.

2020 also found us living through a pandemic, where “social distancing” was the norm.  What better hobby is there than one where you stand out under the stars alone at night?  Marianne and I purchased a telescope with more power and features, a Celestron 8″ SCT Evolution.  What became apparent, though, was that with big telescopes, their power is in making very tiny things visable.  For things not so small, they have a hard time capturing the “big view.”  When large Comet Neowise appeared, my iPhone and 4″ reflector was perfect for capturing the comet and its tail.

This iPhone photo is a reminder to look up now and again. 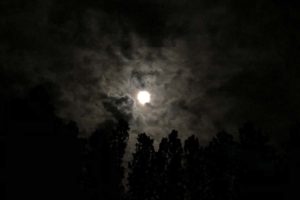 Retired educator. New to astronomy. A banjo player/musician who plays, writes and records; organizes stuff and gets outside as much as I can.
View all posts by Hank Fridell →