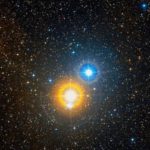 Albireo in the constellation Cygnus (The Swan)

Why are double stars interesting? It’s estimated that in our galaxy alone over 50% of stars are actually multiple-star systems, which puts our sun in the minority.  Also, through studies of binary systems many properties of stars and star formation have been identified.  There are actually many different kinds of binary star systems, but the ones we’ll be seeing tonight are either optical doubles, which look like stars that orbit each other but simply just lie along the same line of sight, and visual binaries, which are stars that do truly orbit each other.  Alberio, for example, we don’t actually know if it’s a optical or visual binary.  If it is a visual binary, the orbital period (the time it takes for the stars to make one complete orbit of each other) is probably at least 100,000 years!